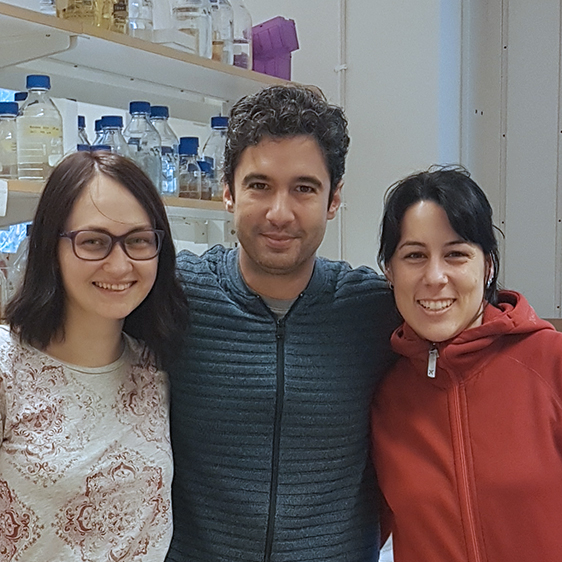 MIMS- scientist publish in the high-impact Journal of the International Society for Microbial Ecology, ISME.

An important survival strategy in bacteria is the release of toxic substances, which can attack and kill cells and other bacteria. One of these substances are D-amino acids, which are secreted to the environment at high concentrations by very diverse bacteria. D-amino acids interfere with the growth of neighboring competitors thereby improving the chances of producer species to colonize an specific niche. Felipe Cava's research group at The Laboratory for Molecular Infection Medicine Sweden (MIMS) studied the biological effects caused by distinct D-amino acids released by the causative agent of cholera, Vibrio cholerae. The study was performed in collaboration with Miguel A de Pedro, a former visiting professor at Umeå University and investigator at the Centro de Biología Molecular ‘Severo Ochoa’, CSIC in Madrid, Spain.

The scientists found that D-Arginine is a very potent and very broad growth inhibitor of many diverse bacterial species, including pathogenic ones such as Burkholderias, well known for their implication in pulmonary infections and their broad antibiotic resistance.

"We found that D-Arginine is a key environmental factor that controls both fitness and survival of bacterial subpopulations and therefore can modulate the existing biodiversity within an ecological niche" explains Laura Alvarez, postdoctoral researcher who conducted the study.

Alvarez and colleagues found, too, that although all the members of the Vibrionaceae family were resistant to D-arginine, not all of them produce this effector. This behavior suggests that a few vibrios may have evolved to help members of the family in an altruistic cooperation to facilitate prevalence of the entire vibrio in a particular ambient.

"Vibrios normally coexist in the natural environment. We think that this type of D-arginine based altruistic cooperation provide some molecular basis of the type of social relations that these bacteria can build in their habitats (e.g. marine) to fight against competing bacteria," Felipe Cava, head of the study,

D-Arginine is a so called non-canonical D-amino acid which means that it is not one of the D-amino acids often found in the bacterial cell wall (i.e., D-alanine, D-glutamic acid). Other non-canonical D-amino acids like D-methionine exclusively target the bacterial cell wall. However, Cava and collueagues reveales that D-arginine is primary targeting the phosphate metabolism given that resistance against D-Arginine can be developed by accumulating mutations in the inorganic phosphate uptake machinery.

"Our study is the first one to show that different non-canonic D-amino acids target different cellular processes. This aspect if in fact extremely important as it could prime novel antimicrobial combinatory therapies based on D-amino acids to combat antibiotic multiresistant bacteria,” Felipe Cava explains the importance of this study.

This email address is being protected from spambots. You need JavaScript enabled to view it.

About MIMS:
The Laboratory for Molecular Infection Medicine Sweden (MIMS) is the Swedish node in the The Nordic EMBL Partnership for Molecular Medicine, which was established in 2007 and is now joint collaboration between the European Molecular Biology Laboratory (EMBL) and the Universities of Helsinki, Finland; Oslo, Norway; Aarhus, Denmark and Umeå, Sweden.

The aim of MIMS is to strengthen Swedish research and enhance the dynamics in the field of molecular medicine, partly by promoting the career opportunities for young scientists.

MIMS consists of about 160 senior scientists, postdoctoral fellows, and PhDs who devoted themselves to basic research on molecular mechanisms of microbial infections. MIMS is founded by the Swedish Resarch council as a national laboratory.