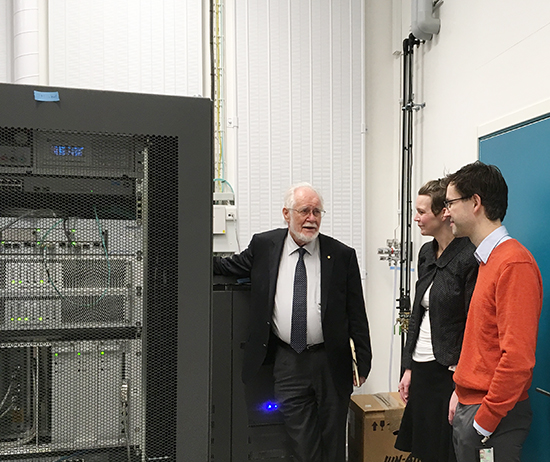 [2018-01-23] A new Swedish-Danish research alliance wants to advance understanding of how biological molecules look and behave. With support from the Knut and Alice Wallenberg Foundation and the Novo Nordisk Foundation, scientists at four universities in Sweden and Denmark will join forces to create a Nordic network in cryoelectron microscopy, whose developers were awarded the 2017 Nobel Prize in Chemistry.

The CryoNet network will bring together experts in cryoelectron microscopy at universities in Aarhus, Copenhagen, Stockholm and Umeå. A Swedish- Danish partnership between the Knut and Alice Wallenberg Foundation and the Novo Nordisk Foundation will fund the network. Each foundation has awarded a grant of €1 million over 4 years for CryoNet.

“By uniting cryoelectron microscopy strongholds in Sweden and Denmark, CryoNet will serve as an important vehicle for exchanging people, knowledge and ideas across these countries. Through this network of leading structural biologists and our collaboration with the Novo Nordisk Foundation, we want to advance research collaboration across borders and significantly advance research of the highest excellence,” says Göran Sandberg, Executive Director of the Knut and Alice Wallenberg Foundation. ”

Both foundations have previously awarded grants to individual cryoelectron microscopy platforms in Sweden and Denmark. In supporting CryoNet, the foundations now seek to integrate the platforms to promote collaboration and knowledge sharing across national borders. One main goal is to help establish state-of-the-art cryoelectron microscopy as a strong pillar of Nordic life science research.

Cryoelectron microscopy is a powerful method that can visualize the three-dimensional structure of proteins in their natural state in great detail. Proteins are made of amino acids joined together like beads on a necklace. The order and properties of the amino acids make each protein fold into a unique three-dimensional structure, enabling a protein to interact with other molecules with compatible structures and thereby perform its functions.

By determining the structures of proteins, scientists can much better understand central questions of biology related to health and disease and apply this information to design new drugs.

Within CryoNet, the participating universities will exchange researchers to rapidly absorb and share new methods and knowledge. CryoNet will also offer training in cryoelectron microscopy and arrange open courses and seminars to benefit the entire research community in the Nordic region and beyond.

“We have formed a promising partnership with the Knut and Alice Wallenberg Foundation in launching CryoNet. Cryo-electron microscopy has opened up new opportunities for understanding the architecture and functions of proteins. Our aim in supporting the establishment of this new Danish-Swedish network is to encourage collaboration and knowledge sharing, thereby strengthening research and education within cryo-electron microscopy in the Nordic region, ” says Birgitte Nauntofte, CEO of the Novo Nordisk Foundation.

About the Knut and Alice Wallenberg Foundation

The Knut and Alice Wallenberg Foundation was established in 1917. The Foundation’s aim is to benefit Sweden by supporting Swedish basic research and education, mainly in medicine, technology and the natural sciences.The Foundation achieves this by awarding grants to excellent researchers and for projects.

Since 1917, the Foundation has awarded SEK 25 billion in grants for research and education, of which SEK 1.8 billion has been awarded annually in recent years, making the Foundation the largest private funder of scientific research in Sweden and one of the largest in Europe.

About the Novo Nordisk Foundation

The Novo Nordisk Foundation is an independent Danish foundation with corporate interests. It has two objectives: 1) to provide a stable basis for the commercial and research activities of the companies in the Novo Group; and 2) to support scientific, humanitarian and social causes.

The vision of the Foundation is to contribute significantly to research and development that improves the health and welfare of people. Since 2010, the Foundation has donated more than DKK 15 billion (€2 billion), primarily for research at public institutions and hospitals in Denmark and the other Nordic countries as well as treatment of diabetes. Read more at www.novonordiskfoundation.com.