We invite you to join the following seminar in the scope of the UCMR Distinguished Guests Seminars Series!

Please register here if you opt to join via Zoom: Registration

Title of the talk: “Cryo-EM of Helical Polymers: From Biology to Materials”
Host PI: Magnus Andersson

Electron cryo-microscopy (cryo-EM) has emerged as the main technique for determining the atomic structure of macromolecular assemblies. Edward Egelman will discuss applications of cryo-EM to a range of polymers, including bacterial and archaeal pili, bacterial and archaeal flagella, bacterial and archaeal mating pili, extracellular cytochrome filaments that conduct electrons over long distances (“microbial nanowires”) and filamentous viruses that infect hosts living in nearly boiling acid.

The powerful methods that have been developed in cryo-EM of biological complexes can now be readily applied to assemblies of peptides and small molecules. Cryo-EM is thus beginning to make a real impact in areas such as materials science, soft matter and chemistry.

Ph.D. Edward Egelman is a biophysicist known for his work on the structure and function of protein and nucleoprotein polymers. He developed the algorithm that is now widely used in cryo-electron microscopy for the three-dimensional reconstruction of helical filaments and tubes. His research has ranged from studies of actin to bacterial pili to viruses that infect hosts living in nearly boiling acid. Egelman graduated from Brandeis University in 1976 with a B.A. in physics. He started as a Ph.D. student in experimental high energy physics at Harvard, but changed fields and received his Ph.D. from Brandeis University in 1982 in biophysics. He was a Jane Coffin Childs postdoctoral fellow at the Medical Research Council Laboratory of Molecular Biology in Cambridge, UK, and became an Assistant Professor at Yale University in 1984. In 1989 he moved to the University of Minnesota where he was an Associate and Full Professor, and in 1999 moved to the University of Virginia where he is now a Harrison Distinguished Professor. He has been president of the Biophysical Society and Editor-in-Chief of Biophysical Journal, and is a Fellow of both the Biophysical Society and the American Academy of Microbiology. In 2019 he was elected to the National Academy of Sciences of the United States.

We invite you to join the following seminar in the scope of the UCMR Distinguished Guests Seminars Series!

Please register here to get access to the seminar: Registration 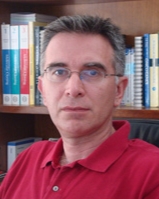 Dr. Gorgoulis is currently Professor and Director of the Department of Histology–Embryology, Faculty of Medicine, National Kapodistrian University of Athens, Greece (www.gorgoulis.gr). He is an elected European Molecular Biology Organization (EMBO) member. He received >30 awards and distinctions. Most of his top ranked publications (e.g. in Nature, Cell, Nat Cell Biol, Mol Cell, J Cell Biol) received instant recognition as they were accompanied by corresponding highlights in editorial articles and/or journal covers. He developed a pioneering senescence biomarker (commercially available under the trademark SenTraGor) and provided guidelines to detect senescence that include also the new biomarker (Cell 2019, Nat Protoc 2021).

Dr. Gorgoulis' main research interests include: Mechanisms leading to genomic instability; The role of the DNA damage response (DDR) network as an anti-tumor barrier (eliciting apoptosis or senescence) and mechanisms leading to escape from these barriers; Development of new compounds and methods to detect senescent cells with precision; The role of the replication licensing machinery in cancer progression; Development of machine learning algorithms to predict biological/drug responses.

Dr. Gorgoulis has special interest in: molecular diagnostics in Pathology, and is the regional coordinator of the European Quality Assessment Scheme for testing KRAS mutations in colorectal cancer, established by the European Society of Pathology. He is also a coordinator of the Greek national: “Emblematic action to handle SARS-CoV-2 infection: Epidemiological study in Greece via extensive testing for viral and antibody detection, sequencing of the virome and genetic analysis of the carriers” (2020-2022) and his lab was appointed by the government as a national reference lab for COVID-19 tests.

Open position: Up to five tenure-track positions as Assistant professor

Joint call of the Faculty of Science and Technology at Umeå University, Sweden.

Welcome to apply to become one of our new Assistant Professors at Umeå University! With this faculty joint venture, with a six-year appointment we want to give junior researchers the opportunity to develop a long-term research activity and to qualify for promotion to an Associate Professorship (Senior Lecturer). We welcome your applications before 15 February 2022!

Congratulations to Xiaotong, Emelie and Anna for presenting the three best posters at UCMR Day 2022!

This achievement is awarded with the UCMR Ambassador grant!

"Neutrophil extracellular traps as a driving force behind severe COVID-19"

All researchers with an interest in microbial and infection research are invited to a day of inspiring research presentations and an excellent opportunity for networking and initiation of multidisciplinary collaborations.

Please note that the deadline for the submission of abstracts for a poster presentation has been extended to December 31st 2021. On a first-come-first-serve basis, you will also get the possibility to orally present your poster during a pre-recorded 2 min poster elevator pitch.

More information and registration on http://www.ucmrday2022.se/